Dogs, especially senior dogs, deserve to live out the rest of their lives in peace. They deserve a safe and loving environment before the cross the rainbow bridge.

But not everyone feels that way. Oscar, a senior Australian Shepherd, was found by the side of the road. He suffered alone for three days, ignored like yesterday’s trash. 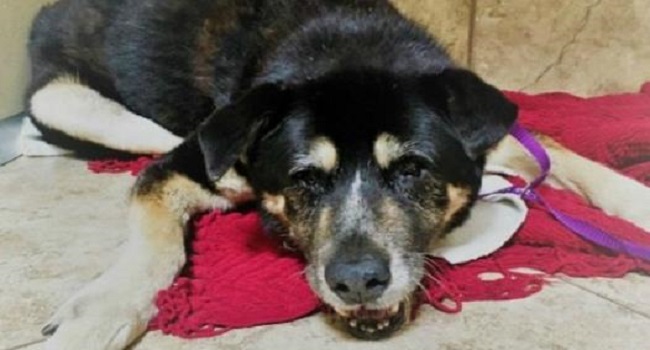 No one wanted a 10-year-old mixed breed whose hind legs are collapsing behind him. Thankfully, he was rescued and taken to a vet in Long Beach, California.

He is suffering from spinal stenosis, which is a common affliction among Shepherd and their mixes.

As if being a.b.a.n.d.o.n.e.d isn’t hard enough, Oscar was dissed at the shelter too. ‘’What an ugly dog,’’ the shelter staff heard a woman mutter as she walked past Oscar.

Claudia Hoffman is campaigning tirelessly for someone to take in the poor senior. Oscar deserves a family in the final few years of his life.“Nobody is standing in line for this sweet senior. But I’ll keep networking until that special person or special rescue comes along. Oscar is great with people BUT I DO NOT KNOW how he is with other dogs or cats.

Remember, he was dumped on the streets and has been at the vet since then. He doesn’t care about other dogs when they walk by him. I was hoping a foster would be able to find out more. But that foster needs to be found first…”

It breaks my heart that some people are capable of malicious comments at the sight of a poor dog in need. It was unwarranted.

Please share Oscar’s story to your friends and family.